I’m afraid I have too ingrained the theme of dancing in the street. I don’t know exactly what the reason is, but it is. In this case, a dance photo session in Valencia with Cristina Ros and Estefanía Molina, two dancers who also work as teachers. They accepted the proposal and we took a few photos around the city center. Without going too far, we were going with a couple of suitcases, but we were able to work with a certain peace of mind.

One of the inconveniences that I must correct is my lack of knowing the names of the ballet steps. You seem a lot more idiotic trying to ask for what you want to get, and if not, it is at the expense of the ideas of the dancers. But what I lack in knowledge, luck made up for it, because both Cris and Fani had quite a few ideas about what we could do. There is no way to work with prepared people. Fani is more in the line of contemporary and Cris has the focus mainly on classic, but both are versatile.

So good, saving the problems we had, it is always appreciated the effort that both made and that is reflected, I hope, in the images we get.

Gear for the dance photoshoot

On this occasion, for the dance photo session in Valencia with Cris and Fani, the equipment used was the EOS R6, a Canon 70-200 F4 L, a Canon 24-105 F4 L II and a 135 F2 L. take some manual optics with me, but despite everything, it didn’t seem like a good idea to give up autofocus, especially when moving, so all I brought were optics perfectly adapted to this system and that provided sufficient quality. The R6’s burst shooting is very practical, but in general, for these things, it is best to rely on each other’s ability. In that regard, I still have to work more with this camera to get the best results and, in addition, to be able to express a clear opinion.

I am Sergi Albir, a professional photographer in Valencia, Barcelona, ​​Madrid and many more places. If you need to contact me, you can send me an email to this, my mail, sergi@archerphoto.eu, or a message to +34 644459753, from Signal, Whatsapp or Telegram. What you like most. On Instagram you can find me as @Archerphoto .

You can read the Spanish version of this Dance photo session in Valencia post (including more pics) in https://archerphoto.eu/sesion-de-fotos-de-danza-en-valencia-con-cris-y-fani/

It is possible that taking many photos and writing sometimes seems like much more work than is worth doing. But it is also true that sometimes you build things without realizing it. I had wanted to take pictures of rhythmic gymnastics for some time. But I do not have too many contacts in the sector, so I left it as a wish that had been left pending. And one day there is the opportunity to take pictures of Elena López Benaches. Perhaps the name, does not ring a bell. But she is an Olympic medalist: with the Spanish team she achieved silver medal in Rio de Janeiro (the Equipaso, that’s how they are called). Of course, my doubts were between zero and none. We warned Nadia Alba to help us with makeup, hair and a little assistance in costumes, and she came with her brother, Salva, a classic dancer, who agreed to collaborate as well. He helped us in this night session with Elena López Benaches.

Curiosity moves me, so I asked her many things during the session, even though she has a very extensive and well-documented Wikipedia page .Elena has had an ankle injury from which she is recovering during this year of rest from the competition. She was on vacation in Valencia – she lives and trains regularly in Madrid, but she’s from Turís, a Valencian town), so we took photos here, in the capital of Turia. But I asked her about life in Turís, because in her hometown she even has a street named after her and even the municipal gym is dedicated to her. “The truth”, she confesses, without an apex of arrogance “is that in the town they behave very well with me”. It’s funny because almost never get such remarkable recognitions in life. But it seems that “not being a prophet in your land” is not something that affects Elena.

“I’m still not 100%”, she explains when we are preparing some plans. But the elasticity, the precision and the capacity is incredible. Normally, when doing jumps and pirouettes, there is a factor of luck for the pose to go well. It is not the case. It does not fail a single time, but when she sees herself in the photo, she becomes extremely self-critical. “In that pic I do not have the foot completely OK”. And it’s not that position it’s wrong, it’s that it’s not perfectly stretched. In addition, she excuses himself for not being able to hold for long in positions that she performs perfectly and that are almost impossible to perform. The flexibility is amazing, but his naturalness in the pose is even better.

Rhythmic gymnastics in a deserted Valencia

Our idea of ​​the night session with Elena López Benaches was to make different looks for an almost deserted city on a mid-August night. The idea was not to mount large sets with flashes, but to capture, especially the movement, and the contrast with some places in the city, to look for the urban texture, instead of the coldness of a studio. With the LEDs combined with the streetlights of the city we were slightly low in light, but we did get the desired atmosphere. For this session, Nadia Alba took care of the hair and makeup. “Normally we have to take care of ourselves,”Elena explains to me, when I ask her about the sponsors and the support they have.However, he confesses to me, the atmosphere with the team is very good. “We leave all the negative issues out,” she says, very sure.

Another aspect that we comment on is how such a visual sport does not have a greater, and better media difussion. They had a TV ad,  with Freixenet (an important cava company in Spain), that was seen and well valued. There is even a very interesting little documentary ( https://www.youtube.com/watch?v=KnjX5xD8f28 ), but rhythmic gymnastics do not have a big pull. “There was a lot of glitter on the set,” she recalls, “and it was very uncomfortable, because it got everywhere.” Sometimes in pursuit of the image professionals press a little more than necessary.

I’m Sergi Albir, professional photographer. If you need photos you can send me a message to sergi@archerphoto.eu or a Whatsapp to +34 644459753 today. I make photos, videos and contents both for the Internet and for other media. Scordae has a new formation, in addition to that of his children’s orchestra. The idea is that this orchestra will be populated with young people who leave the first, but has begun with a reduced formation that will incorporate emerging values. This time they had the help of the Agrupación Musical Los Silos . The orchestra is also directed by Eros Quesada and this time they had special collaborators for the work represented. Manuel de Falla’s El Amor Brujo does not deserve less. The cantaora Mely Zafra , the bailaora Silvia Martínez, Ángel López Carreño and Jesús Pérez as stage director completed the casting for  the Cádiz-born author most famous piece, with a libretto by María de la O Lejárraga García, although for a long time it has been considered that the author of the script had been Gregorio Martínez Sierra. 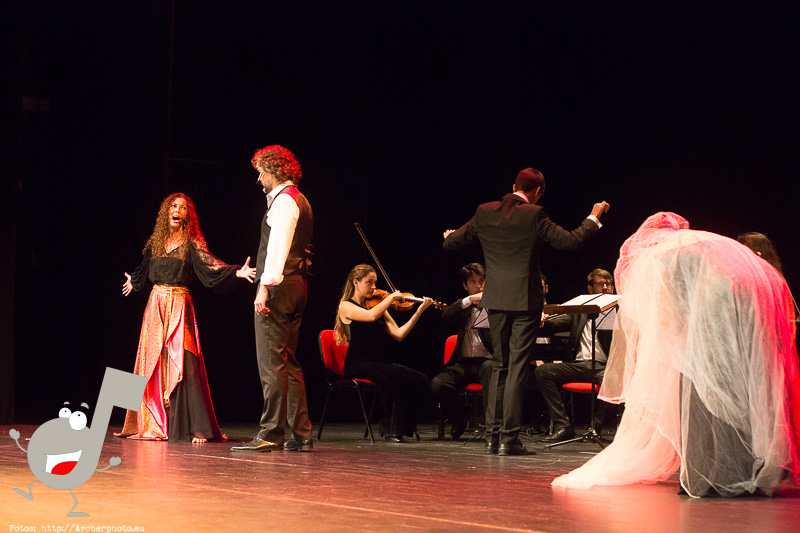 The place chosen for the premiere was the Teatro Tívoli de Burjassot , in Valencia. Eros Quesada is native.  He told me that he has been working on this show for a year. The fantastic reception of the public, this time, was undoubted. The full auditorium, a couple of encores and a wine of honor after are clear signals that the members of the new Scordae (not so new, if we consider that some are the teachers of the original Scordae) are ready for this new adventure. This particular work of Falla has different versions. The one chosen for the representation is the original 1915 with staging. It has a different script to the versions that later became popular. There are others, such as the sextet, the small orchestra for concert, and even more, that Falla arranged for different configurations. The work did not have this title originally, but it was called “Gitanería”.

It premiered with little success and harsh criticism at the Teatro Lara in Madrid, a fact that motivated the revision of the work to give it a better reception among the public. For more information about Scordae:

My name is Sergi Albir, I am a professional photographer. If you need any kind of photos, you can contact me with an email to sergi@archerphoto.eu or a Whatsapp at +34644459753.